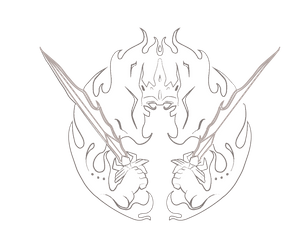 In mid-90s, as death metal found new ways to evolve in Sweden, five talented guys decided to form a band in the beautiful city of Uppsala. They had a clear vision and the determination to create something unique and take this beloved genre further and explore new dimensions.

The debut demo "The Final Chapter" which hit the underground scene in 1995 showed indeed the talent of this quintet and a great potential of something bigger could undoubtedly be noticed, but they were not quite ready to record an album just yet.

Recruiting of a new guitar player and songwriter Peter Laitinen a year later as the band was working on their second demo took the band to a new stage where skill, melodies, and heaviness reached a new exciting level. The amazing sophomore demotape "In the Ashes of the Fallen" released that same year dropped like a bomb and was spread extensively, the reaction was stunning to say the least, and even reached the list of 1996 Top Swedish Demotapes by Scandinavias biggest extreme music magazine Close Up.

After the release of the demo they did some shows in Sweden and earned a reputation of being a great live band. Following the success of their demo, the band was truly ready for an album now, so they signed a deal with Pulverised Records and released the debut album "In the Ashes of the Fallen" in 1998. Three new songs were written for the album which was recorded at Sunlight Studios along with seven songs from their classic demo tapes. "In the Ashes of the Fallen" received great reviews and sold really good as the band did some shows to support the album.

In 2003, the band was armed with nine new tunes, and were ready to record their second album, a deal was signed with Konqueror Records and the album was released the same year. It has a more refined sound with more complex and finer arrangements, but even with such strong material they had at that time, the guys decided to disband the band for various reasons the following year. But in 2014, the hunger for playing this kind of music was there again and they all were eager to create something new, this Imperial machine had more to offer to this genre. But unfortunately, tragedy struck the same year as the singer Tobias Heideman passed away. This didn't stop the band however, they were determined to complete material for a new album, which they did in 2016. And you can tell from the pre-production demos that these boys have something really special in their hands. It's melodic yet incredibly heavy and non-compromising as their new singer Andreas Öman proves to be a worthy replacement for Tobias.

”The Deluge” the brand new offering from IMPERIAL DOMAIN contains 8 well executed tracks of immaculate production values recorded in HSH-studio. With mixing and mastering of the highest quality at E.A.P. by Ronnie Björnström and artwork by Pete Alander at BANDMILL, you can be assured of a piece of work with uncompromising quality.

In The Ashes Of The Fallen